Sea Turtles in the News: What’s the Real Story?

This piece is one in a series of blog entries from recent BioScience authors called "BioScience Bytes." In them, our authors provide commentary on their articles, enlivening the sciences and making the peer-reviewed literature approachable for all readers.

“And would you like a straw with that?” the barista at the coffee shop asked, as she leaned over to hand our coffee drinks to my friend and colleague, José, who graciously declined. As we walked away from Coupa Café with our straw-less iced coffees in hand, we chatted about the anti-straw movement that has built momentum across the country. As sea turtle biologists, we have felt particularly tied to the issue ever since sea turtles became linked to the movement, which happened when a YouTube video of a sea turtle with a straw stuck up its nose went viral. “It frustrates me sometimes,” José said, “Friends correlate straws with sea turtles and will turn to me and say, ‘Oh yes! We need to refuse straws so we can save sea turtles!” But José and I both know that while reducing single-use plastics is important, other types of hazards that can have greater impacts on sea turtles seem to fall by the wayside in public discussions. 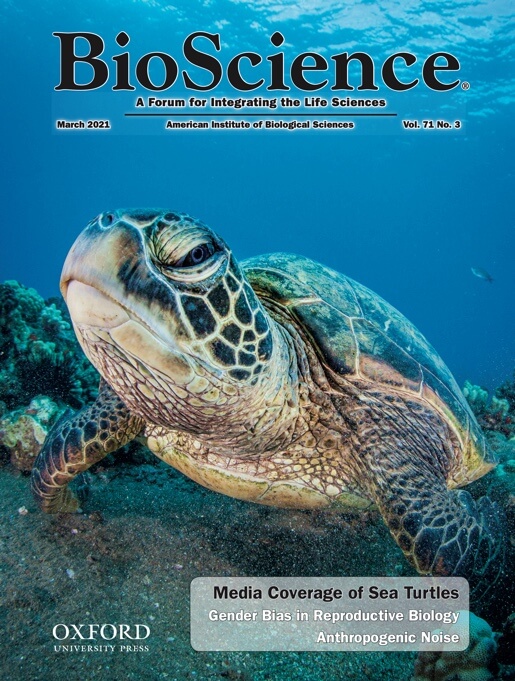 I began to think more deeply about how the ways people obtain knowledge about these charismatic animals—and about how these sources may influence their understanding. The news media can be influential in focusing public attention on important topics, and in the process shape broader understanding and public perceptions. Importantly, we tend to relate importance with quantity; the amount of news coverage a particular topic receives can lead us to believe it is more important than other topics. In our study, recently published in BioScience, we assessed the frequency of news reports on issues around sea turtle conservation, a first step in evaluating how a concerned layperson may perceive information around these animals.

We collected and analyzed over 700 sea turtle–related text news articles aggregated by Google News to assess trends in reporting on sea turtle conservation issues over the past ten years. We found that most news articles that mentioned threats to sea turtles touched on hazards related to pollution (e.g., light, plastic, oil pollution) or non-fishing resource use (e.g., the harvest of sea turtle eggs or meat, vessel strikes, human harassment). Digging deeper, we saw that news attention on sea turtle threats in recent years was driven primarily by a few specific hazards within these categories, including, increasing reporting on the impacts of light and plastic/trash pollution.

The unbalanced focus of media coverage on plastic/trash pollution as a sea turtle threat is unsurprising, given the linkage of sea turtles with the anti-plastic movement. However, it would be a cause for concern if readers were to prioritize this as the most significant—or only—threat facing sea turtle populations. While plastic and trash can indeed pose harm, scientific consensus suggests that in many cases, this sort of pollution is only a small piece of the larger sea turtle conservation problem.

Sea turtle conservation is more complicated than the simplified version the media may portray, but it is nonetheless important to consider how the news reports on these issues, given its strong role in building public opinion and awareness. Our findings suggested that news coverage on sea turtle hazards may be disproportionately focused on just a few threat types, which may bias public opinion. To address these biases, experts may need to take a more active role in communicating the impacts of other pressing hazards to the wider public. While reducing single-use plastics are important, shifting the unbalanced media narrative around sea turtle threats can be a valuable step in the conservation of these enigmatic animals.

To learn more about Sea Turtles in the News: What’s the Real Story?, please see the full article online in BioScience magazine.